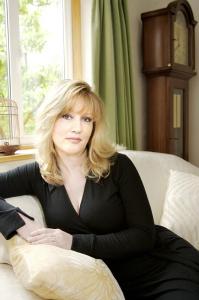 As a fiction writer I seem to gravitate towards either the supernatural, or comedy. It’s a bizarre whizzing from one end of literary genre to the other – like an out of control typewriter. However, with a 20 year + background in nursing and medical sales, I suppose it’s inevitable that gallows humour creeps in. I’m a Northern lass (UK) too – and there’s an in-built armour of self-deprecation pertinent to the environment in which I grew up: no one is allowed to take themselves too seriously.

So when I began to write fiction, around 10 years ago now, many of my short stories were humorous. I guess I’m also the kind of person who trips up steps into revolving doors, goes out of the house with a Velcro roller still stuck in the back of her hair, says exactly the worst thing at the most inopportune moment, and generally endures a lot of toe-curling, squirmy  situations. So I have a lot of real-life experience – lucky me – only natural then, to make it an art form.

My dad took the proverbial micky out of me since I was old enough to crawl. One incident highlights the point – my parents took me pony riding, the horse sneezed and I flew off. Bawling my eyes out I quickly realised they weren’t coming to my rescue because they were rolling around laughing too much. Oh how that hurt! It sort of went on from there. I’d love to have been an actress really, but I had to earn a living and so nursing it was, and from there medical sales, where I eventually specialised in mental health, which came in handy with a family like mine.

After writing short stories for magazines over many years, my first comedy novel, Expected was published last year by Crooked Cat, and I’m happy to say it’s made most people laugh their socks off. I will do a sequel for my hapless heroine, Sam Sweet, but I’m also writing serials for magazines now, and I have a very dark supernatural thriller to finish. I’m not sure where the fascination for all things spooky comes from…but rest assured this is as scary as it gets… Meantime there’s a collection of dark thrillers in 3am and Wide Awake published by Alfie Dog Fiction, and both books are available on Amazon.

More information is available on my blog: http://www.sarahengland@yolasite.com

Sarah England originally trained as a nurse in Sheffield, England, before going on to work as a medical representative specialising in mental health. Since then she has had around 150 short stories published in national magazines and various anthologies; most recently a 3 part murder-mystery serial in Woman’s Weekly. Sarah’s 3am and Wide Awake – a collection of 25 dark tales, mostly supernatural stories, or medically themed thrillers, was published in May 2013 by Alfie Dog Fiction; and Expected, a comedy novel with Crooked Cat Publishing, was released on 28 June, 2013. She is now working on a supernatural thriller, and continues to write serials and short stories for magazines.